The blockchain isn’t just for cryptocurrency any more. This radical new technology has led to the rise of DApps or decentralized apps, which are applications that are stored on the blockchain. Similar to web applications, DApps provide a particular service to the user, but the app functions using the blockchain, not a traditional server. Below, we’ll explore some of key differences between DApp development and web app development.

If you’re designing a DApp, one of the first things you’ll notice is that the application doesn’t live in a single location, like a traditional web server. It exists on the blockchain, which means the source code and all of its data is spread across a series of nodes, or computers, that work to verify every transaction made on the application. In terms of code, this means every app function needs to involve a rigorous verification process, in which the data is sent to each of the separate nodes, so they can make sure the terms of the agreement are valid. 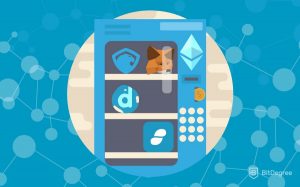 DApps also cost money to use, while many web applications are free. Unlike a regular web app with built-in ads that are monitored by the company, a DApp runs on its own. That means users need to put some money into the system to keep it going. This money helps support the nodes that work to validate app transactions. These separate nodes keep the system independent of regulators and middle men, but validating a transaction takes a lot of computing power, thus most DApps will charge users a fee to participate.

DApps also differ from web applications in that they can store data on the application itself. Web applications will store user data on a separate server usually located at the company’s headquarters. But DApps are made up of the data the users create. Every time a user makes a transaction on the DApp, the nodes work to verify the exchange. If the transaction is approved, a new block in the chain is created that contains all the data and details of the transaction. This data is public for everyone to see, which allows others to verity the transaction later on, creating a transparent system that instills confidence in the user.

With so many nodes working to verify every transaction on a DApp, the wait time can easily get out of control. DApps are notoriously sluggish because they depend on a community of nodes, not a single computer server. When creating a DApp, you might be surprised that you’re only able to conduct a handful of transactions per second. While this might seem like a major roadblock to getting your DApp off the ground, the slower verification process is worth it when it means your DApp can run independently using the community of nodes you’ve created.

Just to put that in perspective, most web applications, including Facebook, can run thousands of transactions per second, which is essential when you have over a billion daily active users. All Facebook has to do to approve the transaction is write a piece of code that oversees user activity. But DApps are made up of a series of nodes that each have to work independently to verify every transaction. The transaction is verified using a consensus algorithm, such as Proof-of-Work or Proof-of-Stake.

DApps are quickly becoming one of the hottest trends in app development. Companies are racing to use this technology to disrupt business as usual across a wide spectrum of industries. Start learning the language of DApps today and bring your own decentralized app to fruition.

Interested in making the most of DApp technology? Contact the blockchain developers at Ionixx Technologies for a range of services, including blockchain consulting, ICO development, and DApp development.